While lead exposure is also harmful to adults, lead exposure harms children at much lower levels, and the health effects are generally irreversible and can have a lifelong impact. The younger the child, the more harmful lead can be, and children with nutritional deficiencies absorb ingested lead at an increased rate.  The human fetus is the most vulnerable, and a pregnant woman can transfer lead that has accumulated in her body to her developing child. Lead is also transferred through breast milk when lead is present in a nursing mother.

Evidence of reduced intelligence caused by childhood exposure to lead has led the World Health Organization (WHO) to list “lead-caused mental retardation” as a recognized disease. WHO also lists it as one of the top ten diseases whose health burden among children is due to modifiable environmental factors.

Most highly industrialized countries adopted laws or regulations to control the lead content of decorative paints - the paints used on the interiors and exteriors of homes, schools, and other child-occupied facilities - beginning in the 1970s and 1980s. No similar regulation is yet in place in Thailand, although in early 2015 the Thai Industrial Standards Institute completed draft legislation requiring mandatory standards on lead content in enamel paints of no more than 100 ppm.

In 2014-2015, Ecological Alert and Recovery - Thailand (EARTH) purchased a total of 100 cans of solvent-based enamel decorative paints for lead content analysis, in order to compare with previous studies and identify trends in the removal or reduction of leaded ingredients among paints sold in the Thai market. This 2015 study focuses only on paints which were previously found to contain lead content above the Thai voluntary standard of 100 ppm. In addition, manufacturing dates were examined to ensure that the 2015 study reflects paints manufactured more recently than previous samples in 2013 and 2010. The 100 paint samples in this study represent 56 brands produced by 35 paint manufacturers.

All paints were analyzed by an accredited laboratory in Europe for their total lead content, based on dry weight of the paint. This is the third study EARTH has released about the lead content of new decorative enamel paints in Thailand. 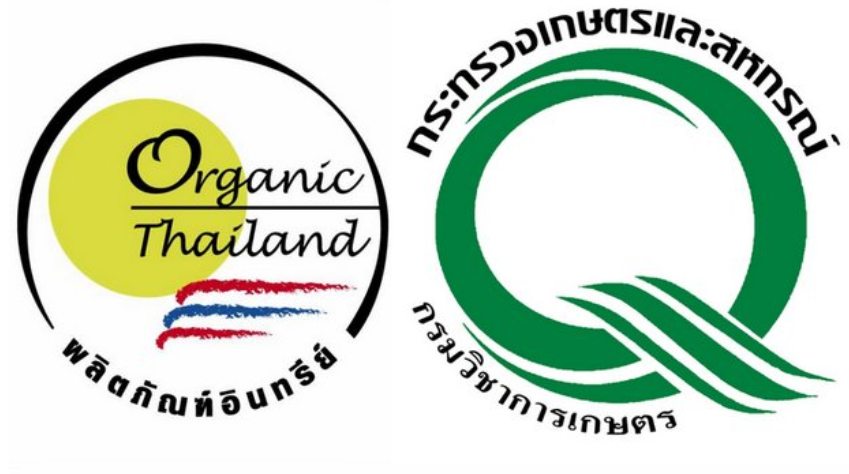 The Department of Agriculture (DOA) insists it has imposed strict measures to check on chemical residues in vegetables and fruits before granting them Good Agricultural Practice (GAP) and organic product certifications.

The department made the statement Thursday after a food safety survey conducted by the Thai-Pesticide Alert Network (Thai-Pan) showed that more than half the fruits and vegetables awarded the government's "Q mark" for quality were found to be highly contaminated with chemical residues. 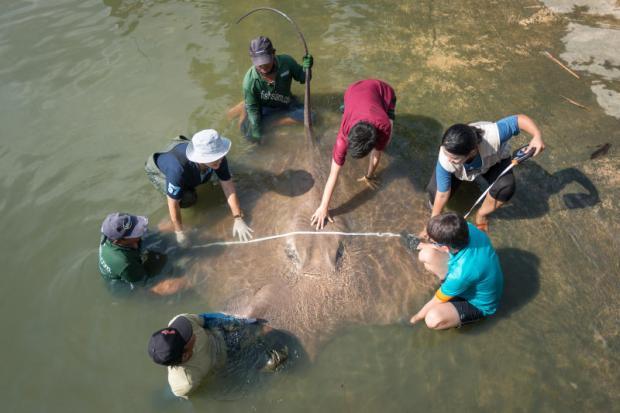 Fish out of water

A rarely sighted creature -- the giant freshwater stingray -- was lying still on the bottom of the big blue tank.

The animal was exhausted but still looked majestic with its oval body measuring almost two metres in length. 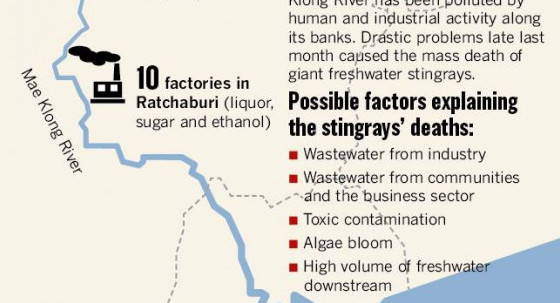 But scientists are divided over exact cause; “wastewater released for years”

THE deaths of giant freshwater stingrays in the Mae Klong River could have been caused by a combination of pollution created by human activities and natural phenomena.

Chemical Watch 27 October 2016
Decision is 'incompatible' with EU's international commitments
A group of NGOs are contesting the European Commission’s Decision to authorise the use of two lead chromate pigments.

Nobody Should Drink Water with Lead, Especially Kids. EWG’s Guide for Parents Can Help

Scientists, pediatricians and public health officials from the U.S. and around the globe agree that there is no safe level of lead exposure. Even the smallest amounts can cause irreversible changes, including diminished IQ and behavioral problems in children. 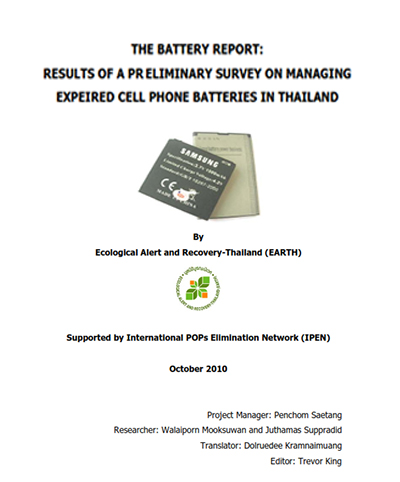 The Battery Report: Result of a Preliminary survey on Managing Expired Cell Phone Batteries in Thailand

Modern humans are not only reliant but it could be argued that they are now dependent on electronic technology. In the realm of telecommunications, especially, there is continuous development of and demand for electronic products. As a result, the increased rate of electronic waste (e-waste) has grown enormously (currently estimated at 40 million tones per year by the United Nations) increase is continuing. Cell phones, in particular, will be disposed of at a rate approximately ten times higher in China and 18 times higher in India in the next ten year period. 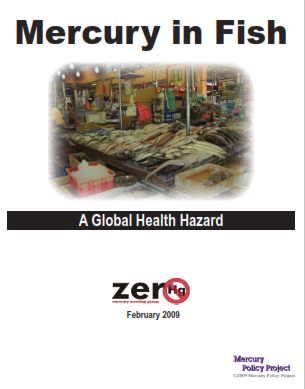 Methylmercury contamination of fish and fish-eating mammals is a global public health concern. The risk is greatest for populations whose per capita fish consumption is high, and in areas where environmental pollution has elevated the average mercury content of fish. But methylmercury hazards also exist where per capita fish consumption and average mercury levels in fish are comparatively low. In cultures where fish-eating marine mammals such as whales and seals are part of the traditional diet, methylmercury in these animals adds to total dietary exposure. 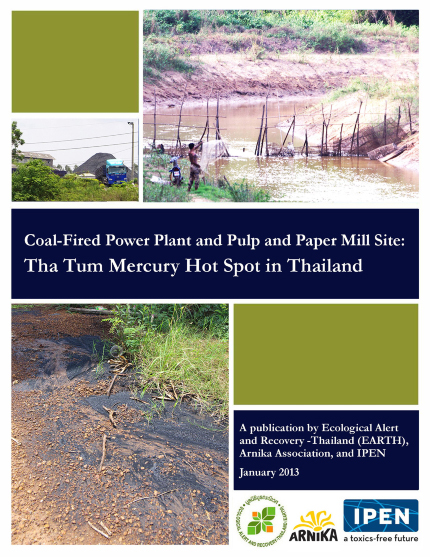 This report focuses on a coal-fired power plant and pulp and paper mill in Tha Tum, Thailand, which are part of the Prachinburi Province’s largest industrial complex located 120 km to the East-North-East from Bangkok, and 5.5 km south from the Prachinburi River. 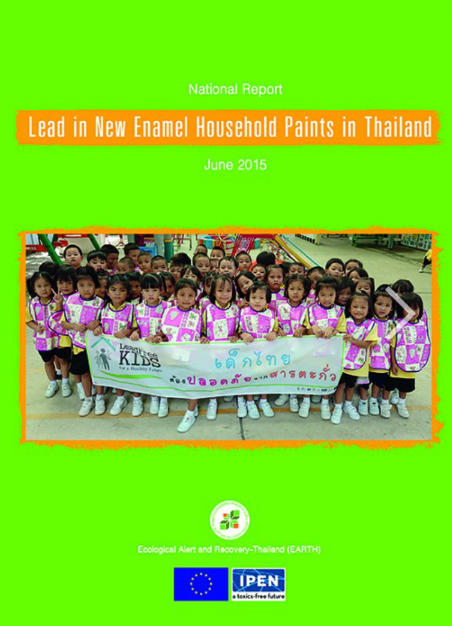 In 2007 and 2008, NGOs in the IPEN network collected and analyzed decorative (home use) paints on the market in 11 developing countries, and in countries with economies in transition. The results were startling. In every one of these countries, many of the paints had dangerously high lead content. In response, IPEN launched a worldwide lead paint elimination campaign. Since then, IPEN-affiliated NGOs and others have sampled and analyzed paints on the market in approxima read more... 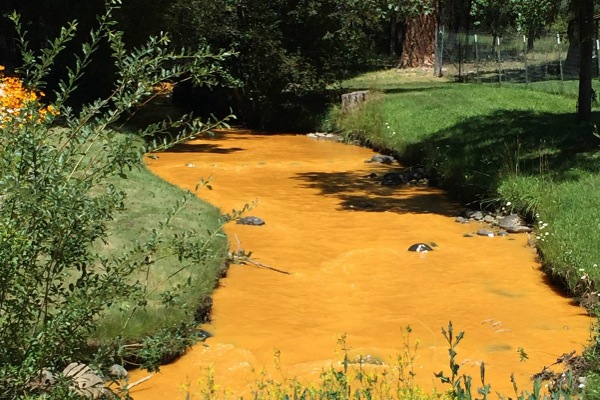 The state of New Mexico plans to sue the US Environmental Protection Agency (EPA) over last year’s toxic Colorado mining spill that sent 3 million gallons of waste into the Animas and San Juan rivers. 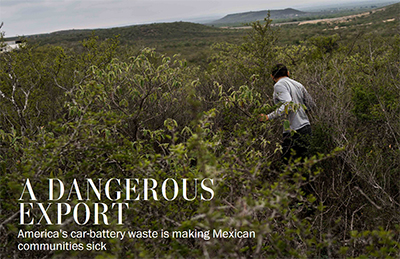 DOCTOR GONZALEZ, Mexico — After the initial headaches and nausea, Juan Gonzalez Mendoza’s physical deterioration came swiftly: deep pain in his bones, elbows and knees that refused to bend, then numbness throughout his left side, steady loss of control over his arms and legs, and finally an inability to walk or even stand.

INDUSTRIALIZED nations such as South Korea are taking advantage of a 2013 administrative order from the Department of Environment and Natural Resources (DENR) that allows the importation of large amounts of potentially toxic electronic waste, or e-waste, such as discarded televisions, mobile phones, and computer components, an investigation by The Manila Times found. 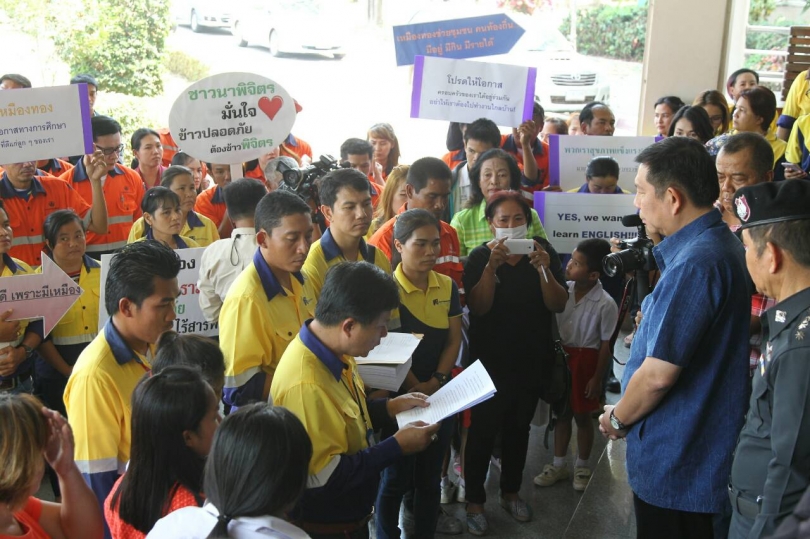 NEARLY HALF of the people living near a gold mine in Phichit province have been found to have abnormally high levels of manganese in their blood as indicated by a study run by Rangsit University.

420 of the people tested had higher than normal levels of manganese. "About 19.52 per cent of those who provided blood samples also have abnormally high levels of arsenic in their blood. The level of cyanide is higher tha normal in 5.88 per cent," 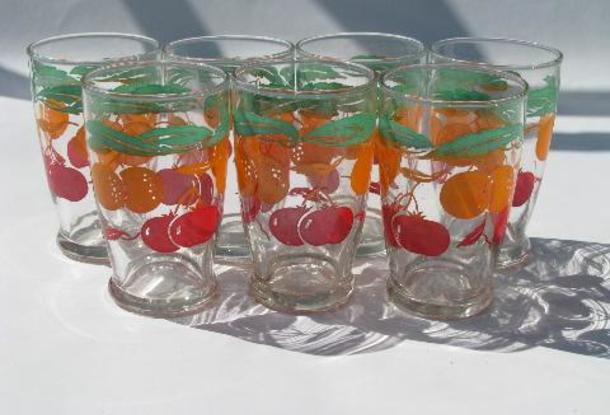 Popular soft summer drinks - regardless whether it is a raspberry-flavoured lemonade, ice coffee or mojito - may become "more heavy" when we drink it. However, the culprits are not the drinks themselves, but the glasses that very often contain toxic heavy metals in colour prints. Arnika​, within the framework of the Let's Eat Toxics Free campaign, analysed several dozens of printed glasses. About two thirds of them contained high concentrations of lead and cadmium. 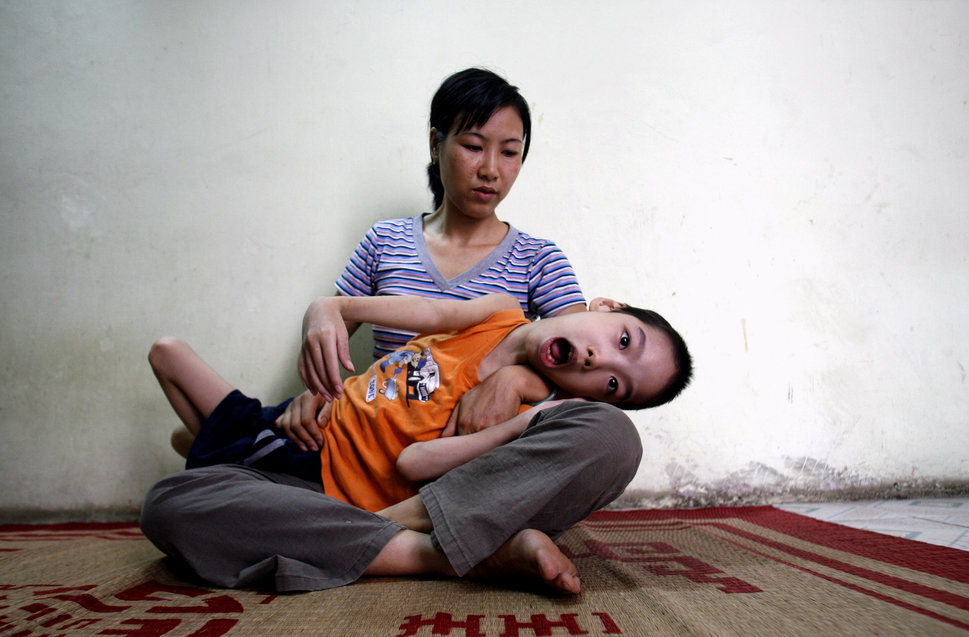 55 Years After Agent Orange Was Used In Vietnam, One Of Its Creators Is Thriving Here

Monsanto is expanding in a country it once helped destroy.

HO CHI MINH CITY, Vietnam ― Fifty-five years ago this month, the U.S. Army began spraying millions of gallons of the toxic defoliant known as Agent Orange over large swaths of southern Vietnam. Today, however, instead of resentment and isolation from the U.S., the country is awash with Americanophilia. 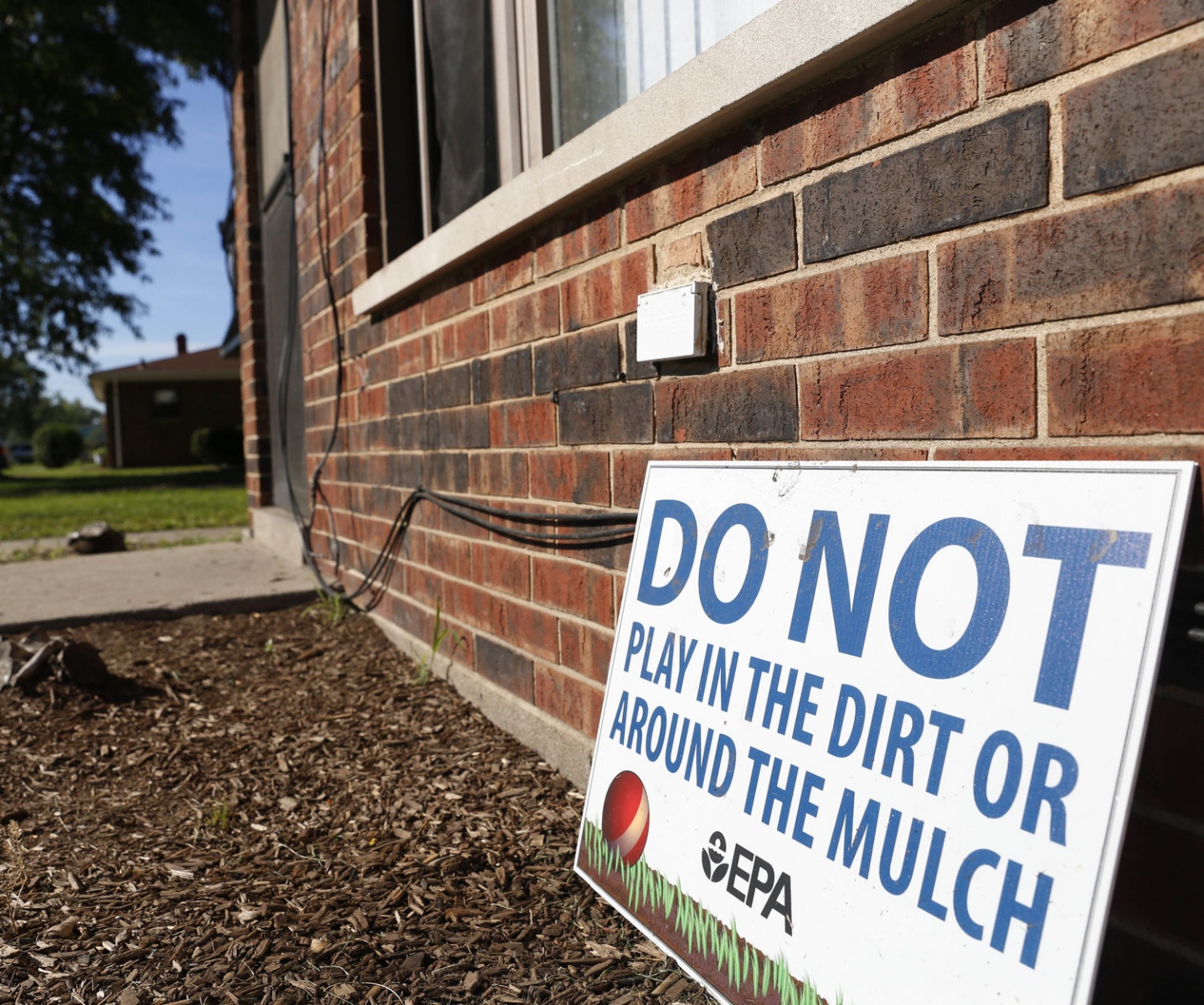 Lead Levels Are Forcing More Than 1,000 Indiana Residents To Relocate

More than 1,000 residents of a public housing complex in East Chicago, Ind., are now forced to relocate because of dangerously high lead levels in the area's soil. 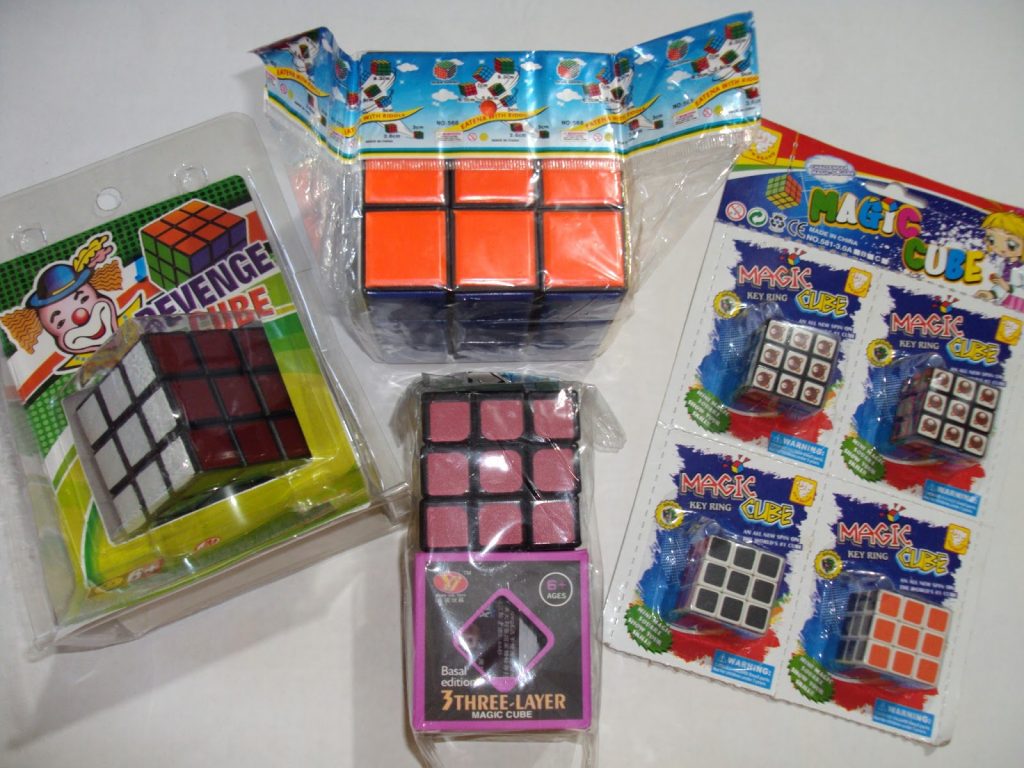 THE EcoWaste Coalition, an environment and public health watchdog, on Tuesday warned that some toys that are designed to exercise the mind may contain toxic chemicals from recycled electronic waste, which can damage the central nervous system and reduce children’s intellectual capacity.

The coalition made known its apprehension following the disclosure of the results of a global survey on toxic chemicals in brain toys at a scientific conference on persistent organic pollutants (POPs) in Firenze, Italy. 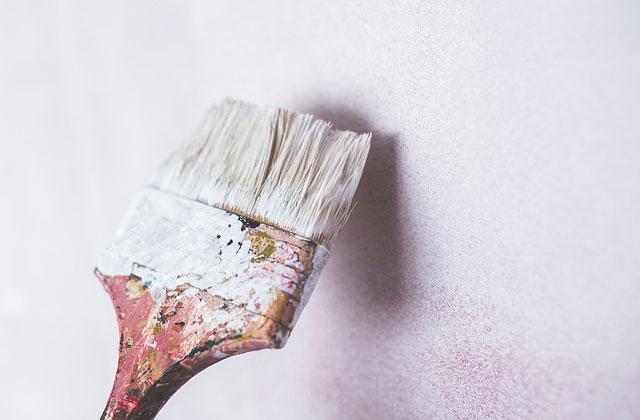 Eight groups site the agency for its lack of attention to a crisis affecting an estimated 37.1 million homes.

Flint, Michigan brought national attention to the U.S. lead crisis, yet a lawsuit filed today (August 24) in the U.S. Court of Appeals reminds that water is not the only place where lead can be found in homes. 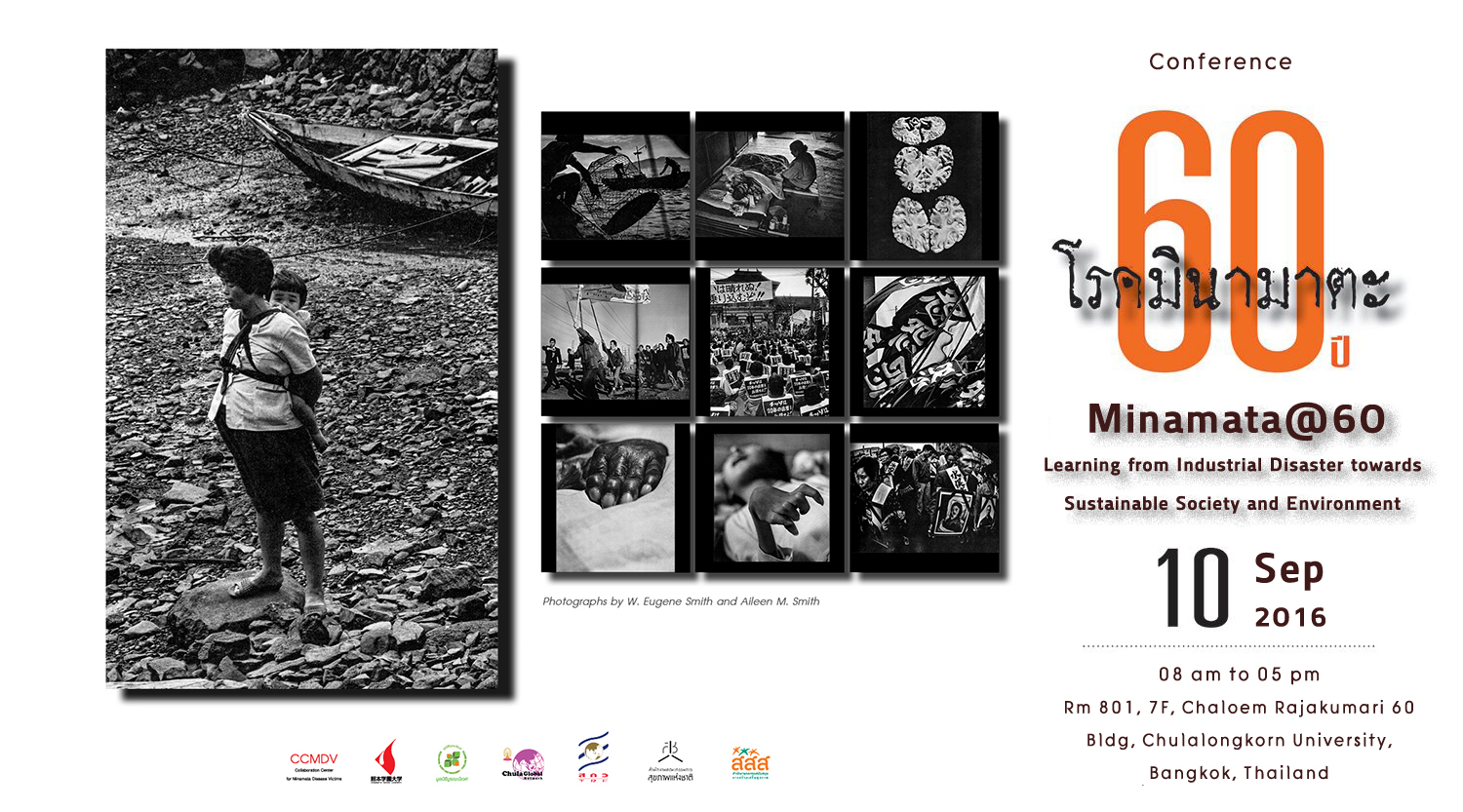 Victims, researchers and academics will on Saturday gather in Bangkok for a seminar marking the 60th anniversary since the discovery of mercury poisoning malady Minamata disease.

To be held at Chulalongkorn University, speakers will include Shinobu Sakamoto, a Kumamoto Prefecture native who contracted Minamata disease, which paralyzes the central nervous system and causes birth defects, in the womb. 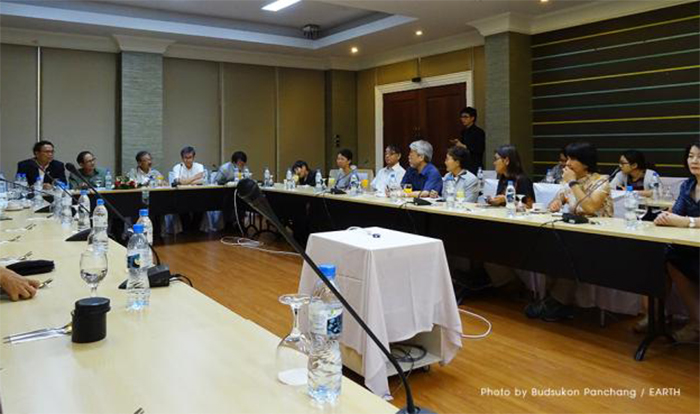 Thailand will be ready to rectify the Minamata Convention on Mercury by 2017, said PCD

The organizers of the “MINAMATA@60: Learning from Industrial Disaster towards Sustainable Society and Environment”, including academics from Thailand and Japan, and Ms. Shinobu Sakamoto, a Minamata Congenital disease patient, met with the Director General of Pollution Control Department (PCD), Dr. Wijarn Simachaya, and the group also met with the representative of the Office of the Permanent Secretary, the Prime Minister’s Office, the Deputy Director of Disease Control Department, the Bureau of Occupational and Environmental Diseases of the Ministry of Health, and the Chair of the Health Committee of the National Legislative Assembly, to urge the related state agencies to ratify the Minamata Convention on Mercury. 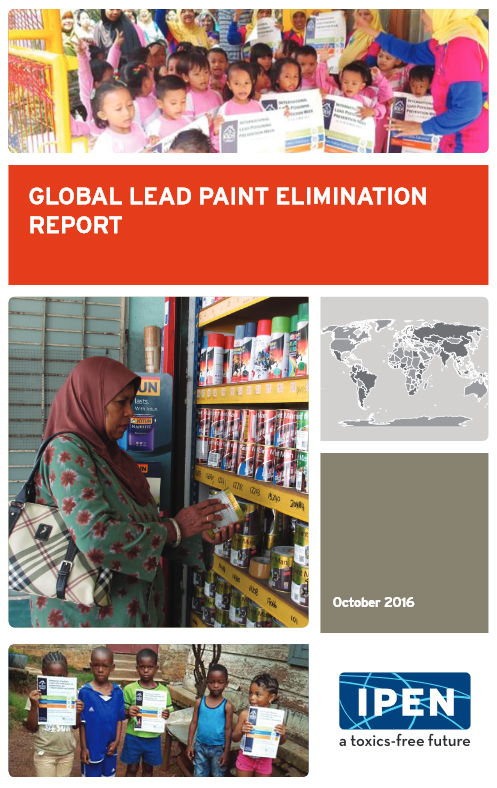 Lead is a toxic metal that causes adverse effects on both human health and the environment. While lead exposure is harmful to adults, lead exposure harms children at much lower levels, and the health effects are generally irreversible and can have a lifelong impact. The younger the child, the more harmful lead can be, and children with nutritional deficiencies absorb ingested lead at an increased rate. The human fetus is the most vulnerable, and a pregnant woman can transfer lead that has accumulated in her body to her developing child. Lead is also transferred through breast milk when lead is present in a nursing mother.