Voices from the Ground: : Concerns Over the Dawei Special Economic Zone and Related Projects 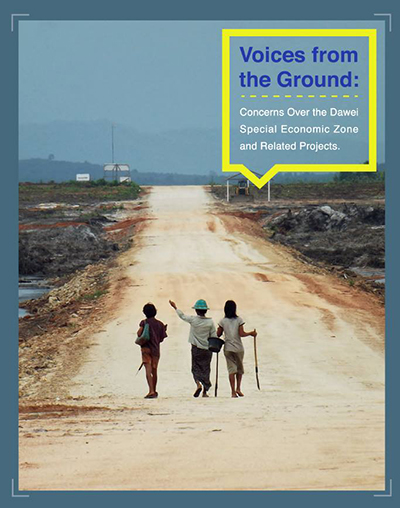 This report relates to the Dawei Special Economic Zone (DSEZ) project in Southern Myanmar, which was initiated in 2008 to develop what could be one of the largest petrochemical industrial estates in South East Asia.  It presents the results of a study to understand the process by which the DSEZ project has unfolded from the perspective of the local people, and the extent to which the rights of the local people are being protected and respected by the relevant States and corporations in the implementation of the project.

The study will be of direct interest to the Myanmar and Thai governments, who have equal stakes in the DSEZ project; the Myanmar and Thai National Human Rights Commissions, to whom appeals have been raised during 2013 by local community groups; and to the relevant private sector corporations who have invested in the project, as well as the private sector and public sector investors who are currently considering future involvement in the project. The report will also be of interest to Members of the Myanmar national and Tanintharyi regional parliament, as well as organisations who are working to support local communities in this area or elsewhere who are struggling against similar projects.

The first part of this report contains a short introduction outlining a profile of the Dawei Special Economic Zone (DSEZ) projects, and their current status as far as publicly known. This is followed by a short profile of the Dawei area, its people and their livelihood activities. The methodology for collecting quantitative and qualitative data from households in 20 villages that have been affected by the project, including in the industrial estate and port area, the roadlinks area, resettlement villages and water supply area.

Key findings from the study raise important concerns related to local people’s access to necessary information, free prior and informed consent, the rights to adequate food, housing and work, preparations for the relocation of evicted communities, the process of calculation, payment and sufficiency of compensation/reparation, as well as access to effective remedy for those whose affected by the development of the DSEZ. The third part focuses on a discussion of the findings in the light of applicable international laws and principles, regional standards, and provisions of Myanmar and Thai domestic laws.