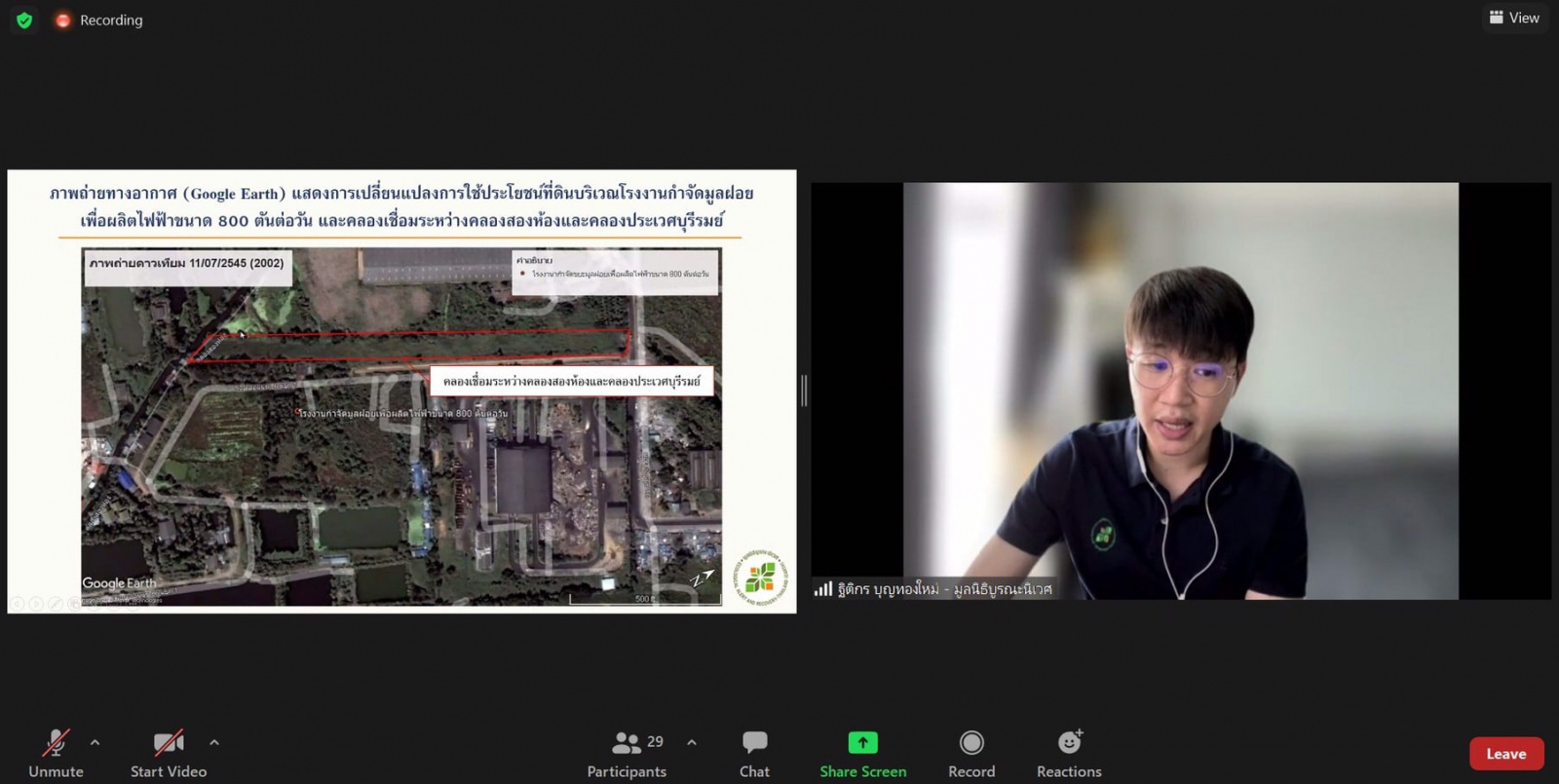 Bangkok: Ecological Alert and Recovery – Thailand (EARTH) joined representatives of the Move Forward Party and citizens of Onnut-Prawet area in calling for corporate transparency and citizens involvement at a parliamentary hearing on pollution caused by the Onnut Garbage factory in southeastern Bangkok.

The parliamentary hearing, called by the House of Representative (HoR) Board for Studying and Monitoring Large Scale Infrastructure Project, came after citizens from various housing estates in the Onnut-Prawet area complained of foul smell from a waste-to-energy power plant in the area.

The power plant, named the “800-ton Municipal Waste Management and Elimination Project Factory” came into being in the past few years. It is one of the many wastes management factories located in the massive Onnut Waste Disposal Center – one of the three main centers for managing municipal waste in Bangkok.

The 800-ton plant was part of the Bangkok Metropolitan Authority’s (BMA) effort to implement a circular solution to the waste overflow problem, which has long plagued the sprawling capital city.

The plant is run by Khrungthep Thanakom, whose 99.98% share belongs to no other than the BMA. It employs A2 technology company to run its Mechanical-Biological Treatment (BMT) procedure, which produces Refuse-Derived Fuel (RDF), and operations to use biogas from municipal waste composting to generate electricity.

Implemented as a part of a national effort to solve the waste management problem, the Onnut plant nevertheless ran into trouble of implementing what they claim as German technologies to the unsorted municipal wastes of Bangkok city.

The factory is located about 100 meters from the Imperial Park housing estate. Residents reported noticing long periods of foul smell since the factory began operating. During this time, many in housing estates resorted to closing windows, buying air freshener and eventually, stuffing wet towels in the gaps under doors and the window sills.

The citizens sent letters of complaints to the Bangkok City Mayor, Department of Industrial Works (DIW), the Pollution Control Department (PCD), the district authority and many other agencies. Only the PCD responded effectively.

In January, after two years of futile complaints and negotiations, the citizens, with the help of Nattapong Premphoolsawat of the Move Forward party – an upcoming contestant for the Prawet district MP position – submitted a letter asking the HoR Board to consider their complaints.

The letter resulted in the March 21st meeting, during which the BMA, PCD and DIW were invited. All sent representatives.

The meeting began with Nattapong’s presentation. Armed with a degree in urban planning, Nattapong immediately pointed out that the location of the Onnut plant went against the 2013 Bangkok City Plan (still in use), which defined the area as a residential zone.

The only reason the factory was constructed, Nattapong posited, was that the military junta under Prayuth Chan-o-cha had given an emergency decree order in 2016, mandating that urban planning law do not apply to waste-to-energy factory. This was confirmed by the DIW later during the meeting.

When the foul smell and health problems emerge in his community, he persistently complained to the company. The company said they are in the process of constructing a “closed system”, which when finished will eliminate all odor problems. The representative now calls on the company to expound the details of this plan.

As the advisor on scientific and environment law issues, EARTH had conducted investigation in the area.

Thitikorn Boontongmai of the research and technical team was one of the investigators. He revealed that the odor level and VOC level detected in the investigation peaked near the walls of the factory.

“During the investigation, we found that the factory had a long pool (easily mistaken for a canal - writer) for receiving wastewater discharge from the Onnut Waste Disposal Center.” Thitikorn said. “We used Google Map to check how this pool came about. Turns out it used to be a natural creek connecting two canals. When the Onnut plant was constructed, they transformed the creek into a pool for wastewater.”

EARTH expresses two major concerns on the issue. One, a water gate separates the pool from the public Song Hong canal, raising concerns that the wastewater may be released into the canal.

Second, the transformation of the public creek into a massive wastewater pool is a serious operation. Was this conducted with proper oversight and procedures?

Adding to Thitikorn’s point, Dawan Chantharahassadee – EARTH’s senior officer and community advisor – added that corporate transparency is a serious issue in this matter. The BMA and its associated private parties must be open in communicating its operations and plans to the public, especially to locals living around the area.

Dawan specifically calls on the BMA to reveal the Factory’s operational permit, its Code of Practice (CoP), and details of its RDF-production process, as well as procedures for managing wastewater and byproducts.

Furthermore, EARTH and the Move Forward party spotted irregularities in the process for selecting the company to run the factory’s MBT and biogas-electricity production process.

In 2017, A2 technology had won an auction for that lucrative position (up to 1870 million baht) under suspicious circumstances. Nattapong pointed out that the selection process had been way too fast, made more suspicious by the fact that A2’s major shareholders had links to big military families.

Dawan adds that A2’s contract should be revealed to check whether it or the BMA/ Khrungthep Thanakom should be held accountable for the pollution and health impact the factory is causing.

At the end of the meeting, BMA vowed to answer all queries in an official document to be submitted to the citizens in 15 days.