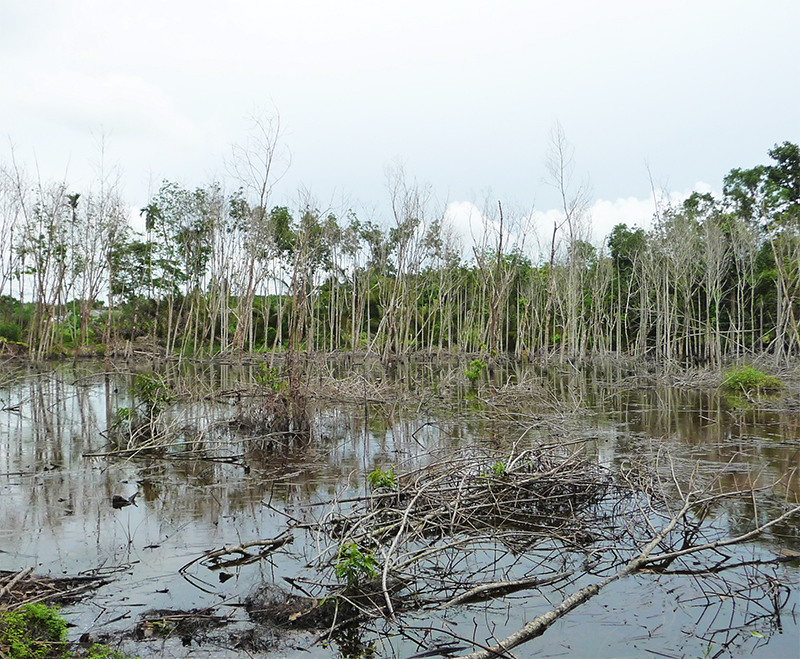 Rubber trees have died standing in Nong Pawa Village due to water pollution caused by the recycling factory.

After repeated complaints to several government agencies over the past ten years by Nong Pawa villagers in Bang But subdistrict, Ban Khai district of Rayong province, who have been affected by chronic water pollution caused by Win Process Company’s recycling factories, the local residents have witnessed that their decade-long polluting problems in the area remain unsolved.

The villagers said they have been suffering for more than ten years due to untreated wastewater discharged by Win Process Company, which causes flooding in their agriculture land, and their rubber trees have died standing. They also complain about foul smelling odour in the area. The polluted environment also has severe impacts not only on their economics but also their health.

Lately, after several attempts over a decade pressed by the villagers to demand the authorities to regulate the polluting factory in their areas, a tripartite working commission was finally formed. Consisting of government agencies, the company, and affected people, the tripartite working group has the first meeting on 13 May 2020 to step into solving the pollution problems caused by Win Process Company, and the relevant government agencies led by Ban Khai District Chief also visited and inspected the affected areas around the factory site.

Following the first step undertaken by the tripartite working commission, on 28 May 2020, Rayong Provincial Industry Office has issued three orders to Win Process Company, ordering the factory type 40 to accurately re-demarcation of its site and allowing its operation to continue. However, the factories type 60 and 106 which its operations do not comply with the laws must be suspended.

In addition, samplings of surface and underground water, and soil around the factory site were also collected by the Pollution Control Department on 4 June 2020 for further investigation and actions.

On 5 June 2020, the second tripartite working commission meeting was held at the Bang But Subdistrict Administration Organization. Attended by the affected villagers together with the local group namely the Volunteer Network for Natural Resources and Community Environment Protection, the meeting chaired by Ban Khai Deputy District Chief, and other participants also included representatives from the company as well as various government agencies such as Rayong Provincial Industry, the Pollution Control Department, Ban Khai District Public Health Office, Chief Executive of Bang But Subdistrict Administration Organization, Rayong Provincial Office for Natural Resources and Environment.

The resolutions from the meeting that day have been issued that vehicle transport trucks will not be allowed to enter or exit the factory site, and the company must submit a plan for the transferring of chemical for disposal. Moreover, if the company does not comply with the law, the Industrial Work Department will order the factory to shut down.

In addition, the deputy district of Ban Khai also asked the Bang But Subdistrict Administration Organization to compile the list of affected persons to demand for compensation from the company.