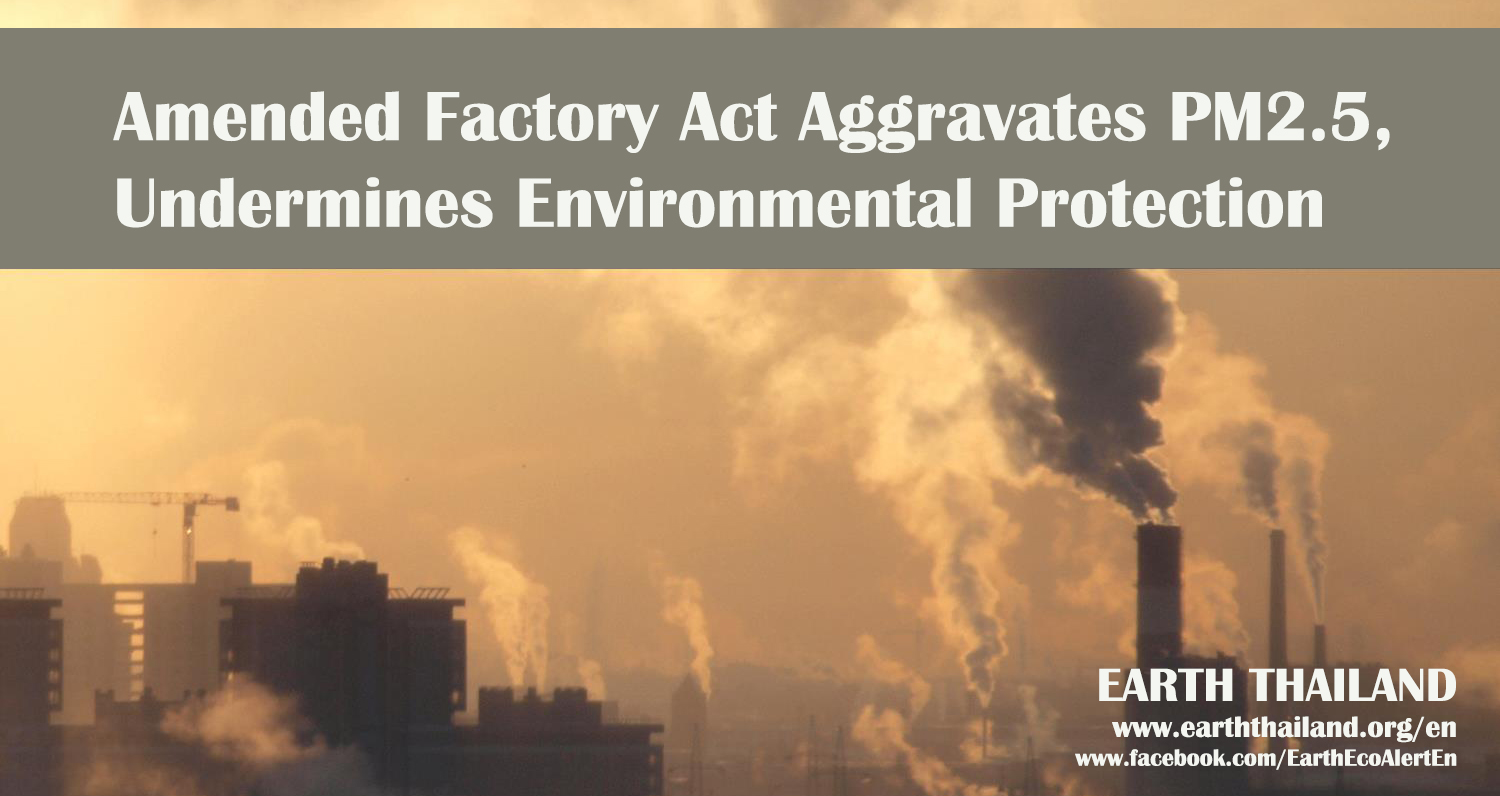 Tara Buakamsri, Director of Greenpeace Thailand, urged that the government must not disregard that the industrial sector is the primary contributor to PM2.5. In the areas of Bangkok and nearby provinces, the level of air pollution is highly concentrated in Samut Prakan province where the manufacturing industry is densely congregated, and Samut Sakhon is ranging second, these two provinces have been severely and persistently encountering the toxic air pollution.  In addition, the PM2.5 also comes from old power plants, including cement, petrochemicals, iron&steel factories, and waste incinerators where the releasing of toxic air is uncontrolled.

“The government’s present efforts to combat PM2.5 has dismissed factories, only focusing on transportation sector and open burning.  For example, Bangkok has the 300-500-ton waste incinerator in Nong Kaem which generates PM2.5 but there is no discussion on how we can manage and control toxic air pollution emission from the industry’s chimneys. To tackle the hazardous air pollution in Bangkok and its vicinity, the government must regulate these factories. Thailand still does not have data or law to enforce the industry to report their emission of PM2.5, therefore it is difficult to come up with the management plan to prevent or reduce the PM2.5”, Tara added.

Penchom Saetang, Director of EARTH, pointed out that the amendment of the Factory Act will aggravate PM2.5 problem and undermine the environmental protection as the amended version is set to reduce the license issuing procedure, cancel the factory license renewal requirement, and lessen the toxic emission inspection.

“The amended version is only aimed to encourage the investment, on the other hand, it dismisses the environmental protection and regulations, and disregard the quality of life and wellbeing of the citizen. If the amended act takes effect, approximately 60,000 factories that are categorized as Category 1 and Category 2 will be no longer regulated under the Factory Act. The definition of the ‘Factory’ and the ‘Establishing a Factory’ will be modified, and these 60,000 factories will be regulated by local authorities and weaker regulations”, said Penchom. She urged the government to withdraw the legal amendment to avoid the environmental crisis and the further violations of the community rights.

Penchom also added that China was once the world’s biggest hub for imported recycling electronic waste, but the country later declared clearly that this type of industry is the source of fine dust particles and then announced import ban on e-waste. Now the e-waste business has moved to Thailand. It is important for Thailand to stop the new sources of pollution otherwise the country cannot succeed in combating the PM2.5.

“Although Bangkok does not accommodate industrial factory, its surrounded provinces are full of many kinds of industries such as cement factories, steel factories, waste incinerators, etc. which generate the fine dust particles. Samut Prakan has a high concentration of toxic air pollution, the air quality and environment have gone very bad, and the situation will only get worse if the amendment of Factory Act takes effect”, said Penchom.