Findings of toxic contamination from Akara Resources’ gold mine have been hailed as significant scientific confirmation of an environmental disaster in Phichit, an environmental science academic has warned.

Chainarong Sretthachau, a lecturer at Mahasarakham University, has also urged authorities to take immediate action on the issue. 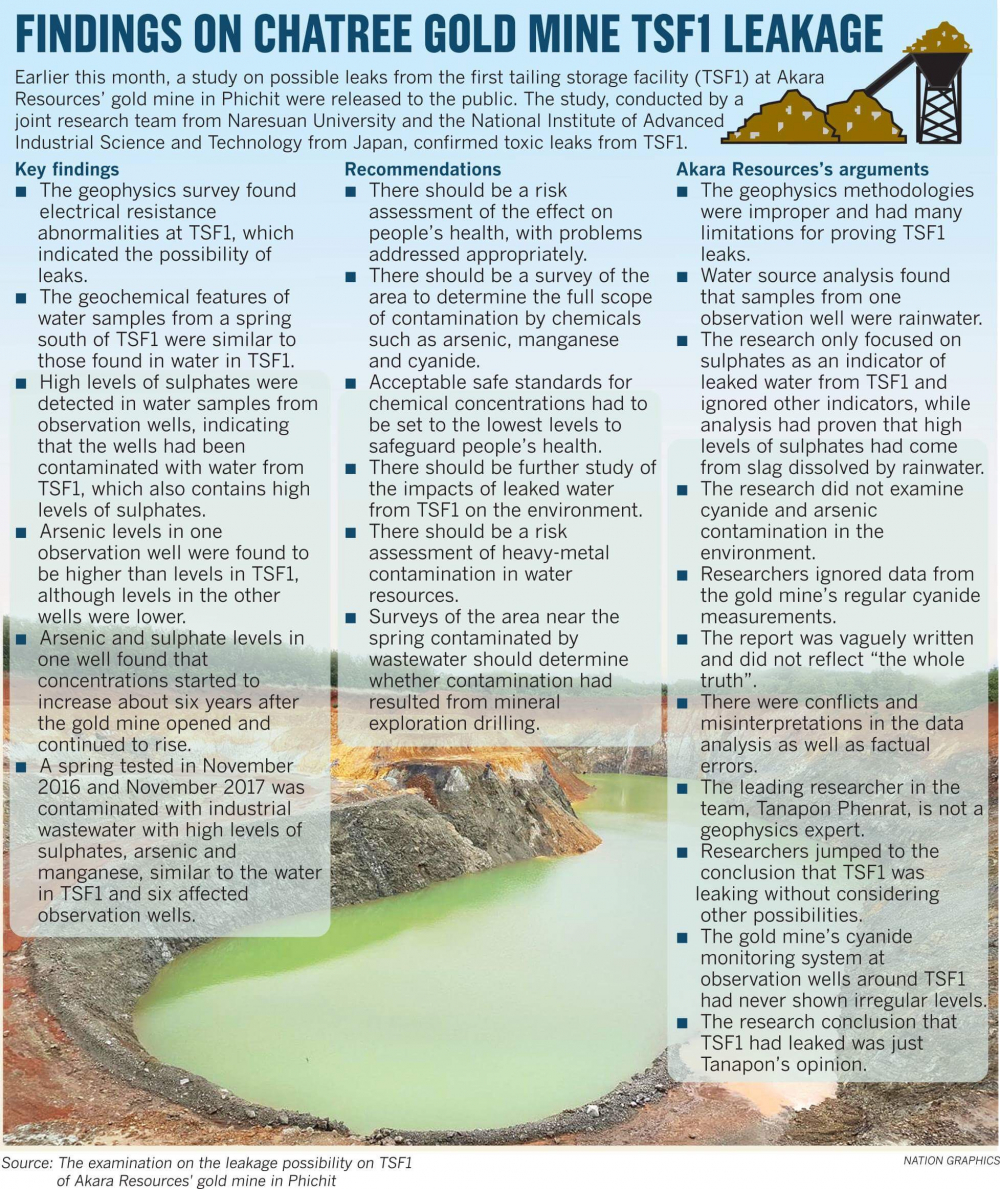 The inspection of the first tailing storage facility (TSF1) at Akara Resources’ gold mine has confirmed the leakage of contaminated water, while Akara has questioned the reliability of both the report and the researcher.

The report on the inspection of the TSF1 facility for possible leakage, by a team of researchers from Naresuan University and Japan’s National Institute of Advanced Industrial Science and Technology, has already been published. It confirmed one of the most important controversial claims surrounding the conflict over the gold mine – that the TSF1 tailing storage facility had leaked.

“Every stakeholder should accept this research conclusion that the gold mine really caused the environmental and health impacts to the local communities, while the government must have clear and urgent plans to mitigate the impacts from the leakage of TSF1,” Chainarong said.

That finding of leakage was seen by many as very significant, especially considering the ongoing arbitration proceedings between Kingsgate Consolidated and the Thai government over a closure order brought against the mine.

The research result might be used to support the Thai government’s decision to suspend the gold mine’s operations.

TSF1, a disposal area for tailings and slag, has been filled and closed, but it was found to contain heavy metals and cyanide from mining byproducts, despite Akara’s claim that tailings had been treated to attenuate cyanide concentrations and 75 per cent of water at TSF1 had been reused.

Prior to the recent report, residents suspected that mine pollution had contaminated the environment, so the study began as part of a fact-finding committee’s examinations of the gold mine’s alleged problems.

According to the report of the research team led by Tanapon Phenrat from Naresuan University, the inspection used geophysics techniques such as the transient electromagnetic (TEM) method and the electrical resistivity imaging (ERI) method.

The water samples from these observation wells and from water springs in paddy fields near the mine also showed similar geochemical characteristics, leading researchers to conclude that contaminated water from TSF1 had leaked from fractured rock at a deeper level and through lateral channels at shallower levels.

Additional evidence of leakage included very high arsenic levels in observation well 5338. Although researchers concluded that arsenic found in the well did not directly come from TSF1, leaked water, which was rich in methane and ammonia, could chemically react with iron sulphide that can be found in the well, resulting in the release of arsenic into the environment.

That assumption was confirmed by arsenic database monitoring, which showed that the intensity of arsenic in the well continued to rise sharply for about six years after the gold mine opened.

Researchers concluded the spring water in paddy fields near the gold mine was also contaminated by TSF1, based on findings that the water showed characteristics of industrial wastewater with high chemical oxygen demand, but low biological oxygen demand.

Samples also showed similar levels of ammonia and sulphate contamination to the samples from TSF1.

From these findings, researchers suggested there should be an immediate risk assessment of people’s health and the environment due to the leakage. They also recommended a full survey of the area to establish the extent of contamination by the chemicals of concern, including arsenic, manganese and cyanide.

There have been reports of sicknesses among the people living around the gold mine, with blood and urine tests in 2014 and 2015 showing that many people exhibiting harmful levels of cyanide, manganese and arsenic.

“The most important issue that the related agencies have to execute first is the impacts to the people’s health. The local residents around the gold mine have been suffering from the illnesses for a very long time, but there is still no concrete measure to help the people,” Chainarong said.

He said that in the period since Akara’s gold mine had stopped operations as a result of a government order to close the gold mine last year, relief efforts to get clean food and water distributed to the affected people had ceased. Authorities should immediately help these people and consider their petition to relocate them out of the affected area, he added.

Chainarong also highlighted the need to urgently address the need for environmental restoration, as the leakage had already caused the pollutants to contaminate the outside environment.

“All related agencies such as Industry Ministry, Natural Resources and Environment Ministry, and Public Health Ministry should start working on the environmental restoration now, as this is really a very urgent and serious problem,” he said.

“It is very important that the work on environmental restoration must be done based on the knowledge of environmental engineering, and include public participation in the process, otherwise the restoration plan will not be fruitful and only a waste of the country’s budget.”

Chainarong also criticised the Primary Industries and Mines Department for what he viewed as idleness in solving the problems from the gold mining operation. He said the department’s stance leaned towards benefiting the gold mine operator rather than protecting the interests of the country and it people.

Akara Resources has disputed the study’s methodology and findings in an attachment to the report. It highlights concerns that the geophysics methodologies of TEM and ERI were improper and had too many limitations to be considered to prove leakage. The company also argued that the report misinterpreted and ignored many facts from the perspective of the gold mine.

Leading researcher Tanapon’s expertise on geophysics was also questioned by the company, including a claim that he had jumped to the conclusion that TSF1 had leaked based on his own opinions.