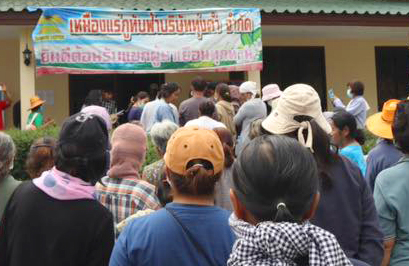 Khon Rak Ban Koed Group (KRBKG), an anti-gold mining villagers in Loei province, Thailand, yesterday inspected Tungkum Company’s gold mine after received the invitation to witness the outcome of the Company’s rehabilitation plan since the mine was shut down.

The gold mine licenses expired on 1 January 2017, and an order issued under Section 44 of the interim charter also right now ban gold mining operations in the country.

“The rehabilitation plan involves with 6 villages, the villagers from all affected areas must be informed and consulted about the plan, not only a few numbers of villagers’ representatives’, said a villager.

The Group then submitted the letter to Loei Industry Office, requesting the full rehabilitation plan of gold mine that done by the Company or relevant agencies, for their detailed counter checking.

The villagers claimed that the rehabilitation plan presented by the Company was the plan in 2015, which is the yearly plan that the Industry Provincial Office and the relevant agencies have to conduct it every year, it is not the rehabilitation plan ordered by the National Council for Peace and Order (NCPO) No. 72/2559, regarding on resolving problems resulting from the operation of gold mining.

“We are curious about the way that the company presented about its rehabilitation plan. Whether this plan is done with the aim to shut down the gold mine permanently, or just to do it in order to reopen the mine?”