Residents block trucks at Loei mine

Claim firm has mined illegally at night, ore must not be removed. 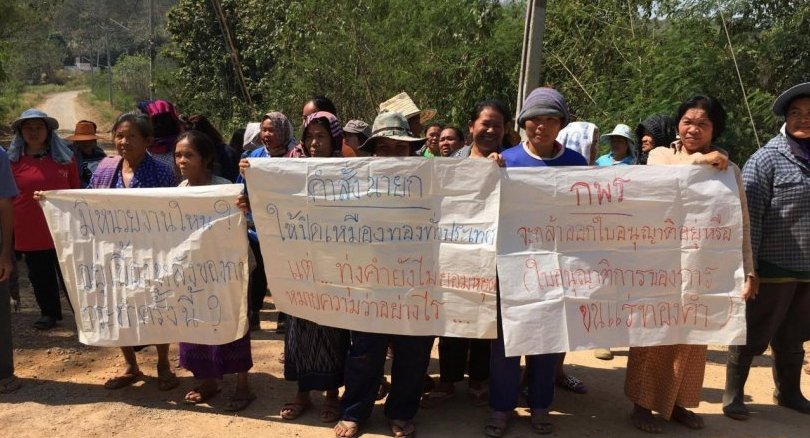 PEOPLE in Loei have urged government agencies to inspect the Tungkum gold mine amid reports of illegal mining, producing many tonnes of ore being despite the mine’s permission to use local forestland having expired.

The Rak Ban Kerd (Love Our Hometown) community group has blocked the entrance to the gold mine in Wang Saphung district since Monday, after they spotted 11 large trucks driving into the mine that morning, allegedly to transport more than 190 tonnes of gold ore out of the area.

Pornthip Hongchai, a member of the Rak Ban Kerd group and villager from Ban Nongnabong, said yesterday that people suspected the Tungkum mining company had been operating illegally after operations were suspended four years ago.

“We wondered how they could get such a large amount of ore. The company said the ore was a byproduct of maintenance work on the mining machines, but we don’t believe that,” Pornthip said.

“The group decided to block the entrance to the mine to prevent the gold ore from being transported and asked relevant agencies to investigate on the origin of the ore.”

She said local people often heard noises of mining at night over the past year. However, official agencies had not inspected the facility for possible illegal mining and local people were afraid to enter the mine area to see what was going on.

“We demand that Tungkum remove the trucks out of the area without filling them with ore and that related agencies inspect the matter,” she said.

She added that there had not been violence in the area and people had sent a letter to relevant agencies clarify the situation, but the trucks had not left the mine as protesters had demanded.

Tungkum gold mine’s permission to use forestland for mining expired in December 2012. The company has been seeking to renew its permit but has so far failed.

The National Council for Peace and Order (NCPO) issued order number 72/2559 last year to temporarily suspend the operation of all gold mines in the country from the start of this year. That order affects both the Tungkum mine and Akara Resources’ gold mine in Phichit.

The order warns that companies that do not comply will be punished, with those responsible facing up to a year in jail, a fine of up to Bt20,000 or both.

An officer from the Primary Industry and Mines Department said Tungkum had informed the department that the ore was a byproduct of mining machine maintenance and had been granted permission to transport ore from the mine as they had paid royalties already.

Sor Rattanamanee Polka, a lawyer for the Community Resource Centre, said if the company was found to have been illegally mining for gold, they would face charges of illegal mining, encroaching on forestland and violating the NCPO order to close the gold mine, and the gold ore would be seized.

“Although they say they have paid royalties already, if their mining operation was illegal, the gold ore will have to be returned to the state,” Sor Rattanamanee said.

She urged authorities to be serious about the case and investigate how the gold-mining company obtained the gold ore, saying it was the officers’ duty to protect the country’s resources.