Lead poisoning returned to the national consciousness this year through the tragic events in Flint, Michigan, but drinking water is only one of many exposure routes. Because of outdated federal workplace safety standards, acute and chronic occupational lead exposure occurs all too often and can harm workers and their children, who may be exposed prenatally or through lead dust carried into the home. We need to protect workers and their families by updating federal workplace lead standards based on the latest scientific research.

The U.S. Occupational Safety and Health Administration (OSHA) regulates workplace lead exposure at the national level through two standards, the general industry standard and the construction industry standard. Both of these standards are severely outdated, based on information available in the 1970s instead of the latest scientific and medical evidence. 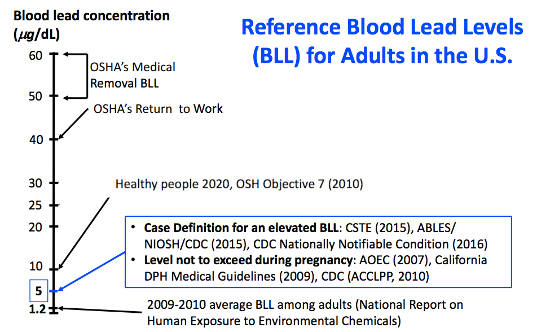 Thus, while OSHA’s mandate is to “assure so far as possible every working man and women in the Nation safe and healthful working conditions,” these goals have not been met for workplace lead exposure.

Under the existing regulations, workers can be exposed to levels of lead that result in 60 micrograms of lead per deciliter of blood before medical removal is required, and they can return to work after their blood lead levels are as high as 40 micrograms per deciliter.

Exposure to levels of lead much lower than what is allowable under OSHA’s current standards have been linked to high blood pressure, decreased kidney function, reproductive effects and neurological impairments.

In industries with high potential for lead exposure, such as construction, gun ranges, and battery reclaiming/manufacturing, not only are workers at risk, but their families may also be exposed inadvertently through take-home lead dust.

In addition, since lead released from bones during pregnancy easily crosses the placenta, children born to lead-exposed workers are at risk for neurodevelopmental and other adverse health effects. Better standards will reduce potential fetal lead exposure in female workers of childbearing age.

Both California and Washington State are in the process of updating their own occupational lead standards. But, why should workers in only two states be privileged to improved health protections? OSHA standards, which cover all workers across the country, should also be strengthened to adequately protect workers and their families.

In the interim, though, enforcement of company compliance with existing federal regulations is also critical. A recent blog post from the U.S. Department of Labor described a case in which OSHA officials responded to worker complaints and cited a Wisconsin shipyard operator with 19 willful violations of the lead standard after detecting elevated blood lead levels in 75 percent of employees tested.

OSHA regulates workplace lead exposure at the national level through two standards. Both of these standards are severely outdated. The incident illustrates the importance of maintaining a well-funded OSHA ensuring it has the resources to monitor adherence to the standards. However, a draft bill for fiscal year 2017 suggests that OSHA’s budget would be cut significantly, which may prevent these enforcement activities and thus put workers at further risk.

We have the scientific and medical evidence that documents the harms of elevated blood lead levels, and we have the technology to reduce occupational lead exposure.

Now it is time to take action to put elevated workplace lead exposure behind us by rapidly adopting a standard that is aligned with CDC’s existing public health guidance, which classifies blood lead levels above 5 micrograms per deciliter as elevated.

We must strengthen OSHA standards for lead and provide sufficient support for the agency’s enforcement actions. The health of our workers – and their children – depends on it.