'All clear' was premature

Environmentalists have criticised the authorities for their handling of a recent explosion and fire at BST Elastomers Co Ltd in Map Ta Phut industrial estate and for deliberately downplaying the fact that residents of 18 nearby communities are still being exposed on a daily basis to toxic levels of a noxious substance. 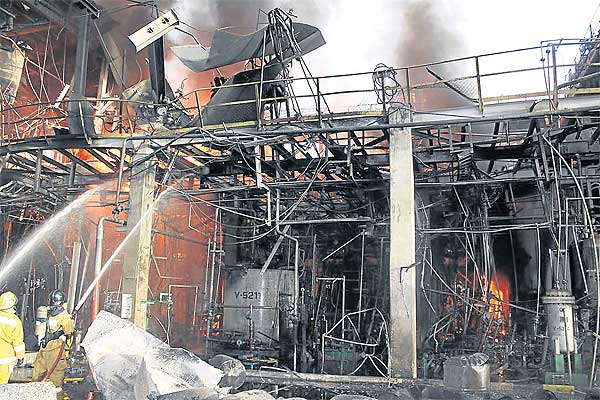 Firemen douse a blaze that ripped through a building after the explosion at the BST petrochemical plant in Rayong on May 5.

Ecological Alert and Recovery - Thailand (Earth), a Bangkok-based, non-governmental organisation which monitors industrial pollution, has also expressed concern about the lack of information available to the public on toxic chemicals, especially toluene.

Toluene is a volatile organic compound that can cause chest pains plus acute irritation of the skin, eyes, nostrils and respiratory system. Long-term exposure is poisonous to the liver, kidneys, brain, bladder and nervous system and stunts brain development in the human foetus.

The accident on May 5, which killed 12 people and injured more than 100, occurred during routine maintenance work on toluene tanks at the BST (Bangkok Synthetics) petrochemical plant.

Walaiporn Mooksuwan, deputy director of Earth, is very worried about the long-term effects of the accident. "'Even though toluene can readily evaporate [under normal circumstances], there are exceptions. If the environment into which it is released has high ozone levels and gets ample sunlight, toluene residue can linger for as long as 27,950 days; that's more than 76 years!"

The Pollution Control Department has been monitoring air pollution in this huge industrial estate, located in the coastal province of Rayong, since 1996. It has consistently measured above-normal levels of ozone in the area and this high concentration of O3 gives rise to fears that the toluene dispersed by the explosion will remain in the local ecosystem for a very long time to come.

Walaiporn criticised the haste with which the authorities declared, a mere two days after the explosion, that the situation was "back to normal". She said that this announcement, which claimed that all the escaped toluene had by now evaporated, was primarily aimed at allaying public fears. She questioned the decision to allow local residents to return to their homes so quickly and urged the implementation of long-term measures to clean up the spill.

Renu Vejaratpimol, an associate professor at the Department of Biology, Silpakorn University, warned that lengthy exposure to toluene can be harmful to one's health. She cited research which found that subjects who inhaled toluene, at a concentration of 1,000 parts per million parts of air, for more than six hours daily, all complained of abdominal pain.

Another study found that babies whose mothers had been exposed to high levels of toluene were born with physical features similar to offspring of alcoholic women, including a flat face, deeply set eye sockets and a flat nose bone. A second report indicated that pregnant women are unable to discharge toluene residue from the uterus and that such an accumulation can ultimately damage their kidneys.

Pregnant women who are exposed to toluene also run a higher risk of suffering a miscarriage. One study found that there were 12.4 miscarriages per 100 pregnancies in female industrial workers who had been exposed to toluene, compared to an average miscarriage rate of 2.9% for women whose work environment was free of this chemical.

Penchom Tang, director of Earth, said that even though she had noticed an improvement in the way the emergency services responded to the Rayong accident - she cited quick evacuation and efficient fire control - there was still a major flaw in the warning system.

Issuing a general alert by having television stations broadcast an announcement may not work, she pointed out, since there is no guarantee that everyone in a given neighbourhood will be watching TV at the time.

Penchom remarked that Map Ta Phut is especially prone to chemical accidents since large amounts of dangerous substances are produced and stored in factories there. "Given that level of risk, it is imperative that a really effective warning system plus evacuation and rescue procedures are put in place there."

The activist went on to note that there are many chemicals routinely used or manufactured in Map Ta Phut which are far more dangerous than toluene.

"Casualties from the BST explosion would have been much higher if it had happened on a normal working day [May 5 was a public holiday]," Penchom said.

"Most of the dead and injured were BST staff or people working for one of its sub-contractors. So implementing proper protective measures and safety routines for employees is also very important."

Toluene is a volatile organic compound that is widely used as an industrial feedstock and as a solvent. It is a clear, water-insoluble liquid with the typical smell of paint thinners. It causes acute irritation of the skin, eyes, nostrils, air passages and lungs. There is no completely effective antidote but Immediate treatment is imperative.

- Any areas of skin that come in contact with the chemical must be washed immediately.

- Remove and discard any clothes tainted with the chemical,

- People exposed to toluene fumes are typically given oxygen to slow down their blood circulation.

- Anyone thought to have inhaled the chemical is given activated carbon to absorb the toxicity. Activated carbon can be harmful to tissues in the digestive system so it is not administered to patients until vomiting fits have subsided.