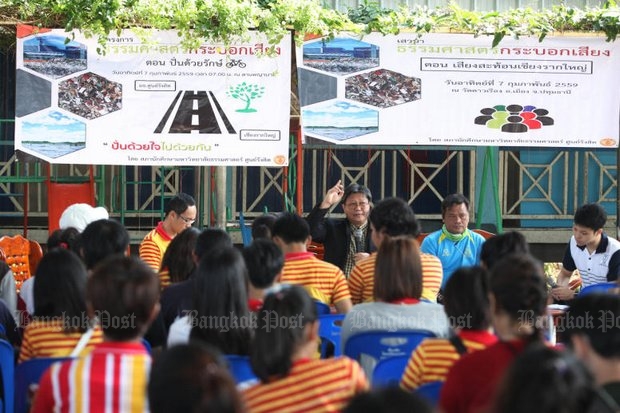 A series of protests against the waste-fired power plant included this one last month, when Thammasat University students joined local residents trying to block the project. (Photo by Thiti Wannamontha)

Chaiwat Vorapeboonpong, assistant to the MWA governor, said the MWA joined residents in tambon Chiang Rak Yai in moving against the project which would pose a threat to the Sam-Lae Raw water pump station, the biggest raw water source in the area, which serves millions of people in Bangkok and its vicinity.

"I'm concerned about the project, as the site is located only about 1.53 kilometres away from the Sam-Lae pump station from which 70% of the five million cubic metres of tap water per day is produced,'' Mr Chaiwat said.

He was speaking Tuesday at a seminar entitled "Good Governance on Sustainable Waste Management: Case Study of the Chiang Rak Yai Waste-Fired Power Plant" at Thammasat University's Rangsit campus. Held by Ecological Alert and Recovery Thailand (Earth), a non-profit organisation set up to monitor industrial pollution in Thailand, and its alliances, it was attended by more than 100 participants.

The project would be built on 140 rai of land in the heart of the district surrounded by the homes of residents.

When residents learned of the project, they submitted their signatures opposing it the same year, saying they feared it could harm people's health and the environment.

They launched a series of protests since then.

Mr Chaiwat said he realised that waste management is a national agenda item and all stakeholders must have a say in the plans.

"I believe the project won't happen as residents are putting up strong opposition. They come to fight against this project by using documents and knowledge to tell outsiders why it is not suitable for their communities.

"No one wants this kind of waste-fired power plant close to rivers and canals as pollutants will inevitably contaminate the raw water source,'' he said.

He said the National Environment Board in 1999 declared Ayutthaya and Pathum Thani as raw water protection zones.

He added the MWA has the authority to make such comments if it believes the waste-fired power plant can pose a threat to its raw water source.

Mr Chaiwat said no representatives from the MWA had been invited by Chiang Rak Yai TAO to give their views on the project.

Suntaree Ratanapassakorn, an engineering academic, said her house is only 150 metres away from the project site.

Ms Suntaree said she had studied the waste-fired power plant's blueprint and found no buffer zone was provided.

The project could do more harm than good to people's health and the environment.

Penchom Sae-Tang, director of Earth, said the government should not support the waste-fired power plant project, which is costly and for which there is no clean technology to reduce the environmental impact.

If the project goes ahead, the farming sector stands to be among those hardest hit.

Ms Penchom said the government should put more focus on waste reduction and recyclable waste at home which could help reduce the amount of waste by more than 70%.