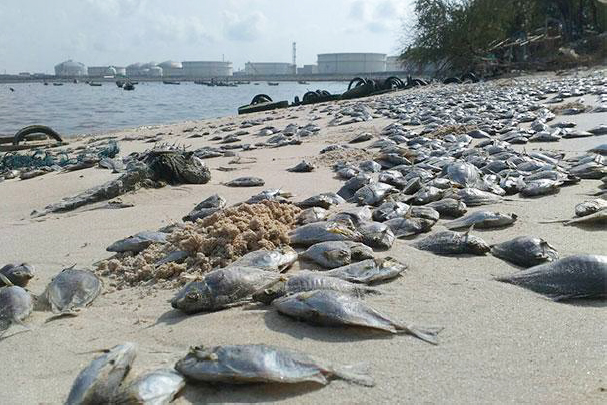 Hundreds of dead fish have washed up on Ta Kuan beach in Rayong, where fishermen have rejected official explanations that the deaths resulted from a naturally occurring plankton bloom. (Photo by  the  Ban Paknam small-scale fishermen's group)

RAYONG — Fishermen and activists in this eastern province want an investigation into the exact cause of mass fish deaths, which authorities insist are part of a natural phenomenon that occurs every year.

However, some local people suspect waste discharged from factories at the Map Ta Phut industrial estate could be linked to the thousands of dead fish that have washed up on Ta Kuan beach.

"In all my 60 years I've never seen such massive fish deaths," said Lamom Boonyong, chairman of the Ban Paknam small-scale fishermen's group. "Most of the dead fish are species that are quite resilient.  Among them are pla salit hin (rabbitfish) and pla singto (lionfish).

"We're sceptical about the cause of these marine life deaths. We question why only fish at Ta Kuan beach are dying. If it's a natural phenomenon as claimed, more fish living along the (Rayong) coast must have died."

The fishermen and representatives of activist groups met on Friday with Vitoon Uthim, deputy governor of the Industrial Estate Authority of Thailand (IEAT) at Map Ta Phut to call for an investigation.

Mr Lamom said the deaths occurred between March 13 and 16 and the dead fish had a combined weight of more than 2,000 kilogrammes.

Earlier, authorities said a plankton bloom was thought to be one of the causes. Supawat Kanadireklarp, director of the Marine and Coastal Resources Research and Development Center, said a plankton bloom can deprive the surrounding water of oxygen as the microscopic organisms die off and decay in large numbers.

Penchome Sae-Tang, director of the Ecological Alert and Recovery Thailand Foundation, urged authorities to disclose the names of factories that released waste into the Pradu Bay area off Ta Kuan beach in order to clear up doubts over the cause of the fish deaths.

Arpa Wangkiart, assistant dean of the Department of Environmental Engineering at Rangsit University said the fish deaths were just the tip of the iceberg when it came to pollution at Map Ta Phut, and this was not the first incident. Similar incidents had occurred in the Map Ta Phut area in the past five or six years, she said.

She said authorities needed to take a deeper look into the causes and should not keep saying that a plankton bloom was the likely cause. Finding out what factors led to plankton booms in the first place might shed light on whether the operations of industries in the area played a role, she added.

Mr Vitoon of the IEAT insisted the fish deaths were a natural phenomenon and that factories at Map Ta Phut limited waste discharges to the amounts set by law. The quality of water at the industrial estate had been checked around the clock, he added.