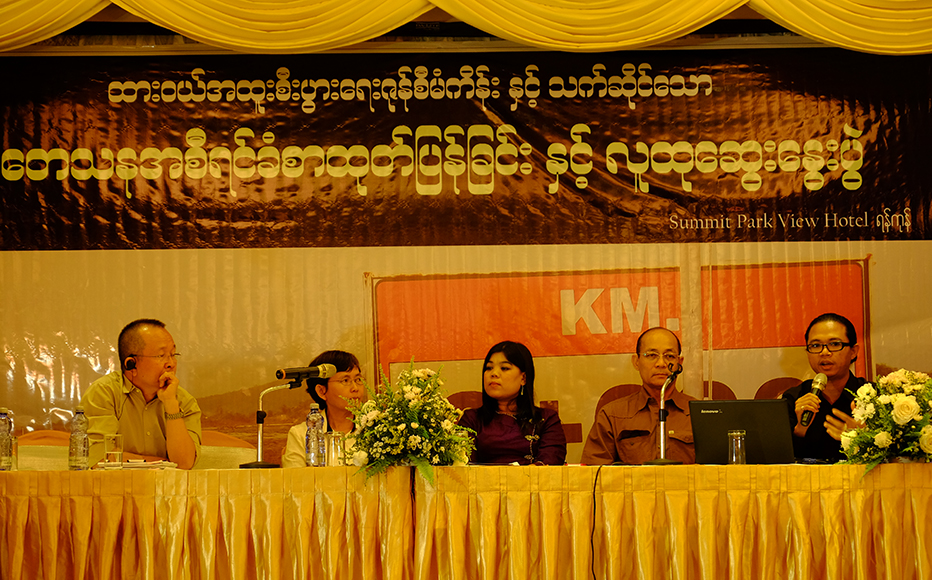 CIVIL SOCIETY organisations (CSOs) and local residents living near the Dawei Special Economic Zone (SEZ) have called for action from the Japanese, Myanmar and Thai governments to tackle human rights violations before allowing the project to resume.

On Monday, they issued a joint statement urging the governments to take action against, among others, corruption among governmental departments related to the project, forced relocation, and to solve the problems before resuming the ground construction of the project.

"If the project is to continue in the old way without finding the root causes to the problems caused by mismanagement, and taking effective action, the locals [people] will be greatly affected and the sustainable and real development for our country would not be created," it said.

A number of CSOs and more than 10 villagers stated their cases at an event on Monday. It followed the three governments' agreement to resume the project, starting with the initial phase awarded to the consortium led by Italian-Thai Development. During 2010-2012, ITD, the original concessionaire which later relinquished the concession, started works on some infrastructure projects.

Htein Than said he and others in Payadat village feared losing agricultural land if the project resumes. He said some in the village, housing more than 300 households and 1,000 people, lost farmland when ITD started a quarry. Waste from rock production has also destroyed nearly 81 hectares of paddy fields. ITD offered to pay 3 million kyats for an acre, but residents said compensation should be 10 million kyats (Bt87,000). No negotiation followed, he said.

"We do not know anything but farming. If we lose farmland, we really do not know what to do for our survival," he said emotionally.

Maung Than of Mayingyi village said more than 81 hectares of paddy fields in his village was destroyed because of the construction of a road linking the quarry to the SEZ site. He said the road blocked the waterway and led to flooding in some areas and shortage in others. He is afraid that the project resumption would worsen the conditions.

Both hope that the new government would look at the problems.

Penchom Saetang, director of Ecological Alert and Recovery-Thailand (EARTH), was among the CSO representatives s attending the event. She raised three demands to the Thai government: new feasibility study, the realigning of participatory processes and other related measures in compliance with laws, norms and standard practices in Thailand.

She noted that information disclosure must be improved as Myanmar's law and regulatory system remains too weak to handle extremely critical social and environmental issues associated with massive investment projects like this.

Saw Frankie, director of Tanasserim River and Indigenous People Networks, said land grabbing emerged after the road construction. He said rich people from the city were granted titles for communal land which was partly converted to rubber plantations.

He attributed ongoing conflicts to lack of corporate social responsibility, failure to information disclosure and lack of standard compensation system.

"Compensation offered is not enough to sustain the family's future. The villagers cannot buy a land plot of the same size in other locations. Land available in the relocation site is not sufficient and the houses built there are not strong enough for potential disasters. All in all, the remedy is not secure enough for alternative livelihoods," said Thant Zin, director of Dawei Development Association.

Meanwhile, the Myanmar government should focus on public |discussions and transparency enhancement. It must ensure the proper system for environmental and social impact assessment, project management and fair compensation scheme.

"The new government needs to comply with best practices to ensure human rights are respected," he said.

"Public consultations should also be conducted in Kanchanaburi so that Thai people can listen to the Dawei people and exchange views … People normally look at results but we urge them to focus on process. We need more consultation processes."