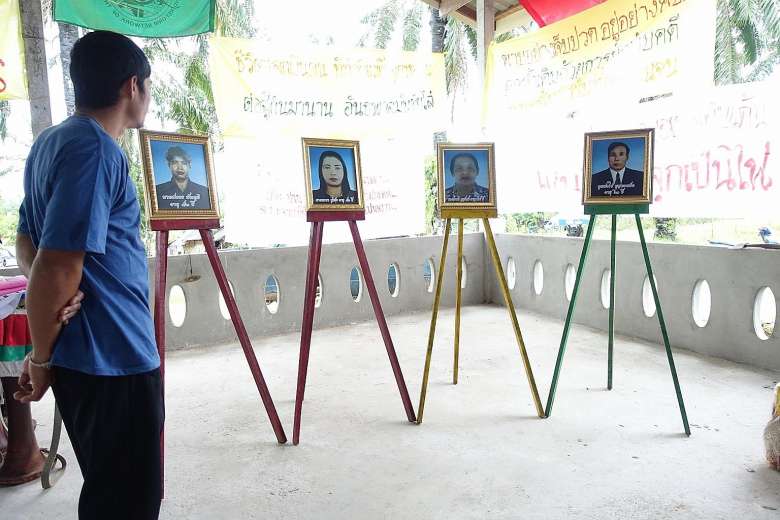 Four have been killed within five years; many say they were being watched or had threatening calls

"Do you sell any beer?" asked the motorcyclist who had pulled up with another man at the small shop run by Mr Chai Bunthonglek.

Before the land rights activist could reply, the stranger had pumped six bullets into his chest and head, killing him instantly.

On Feb 11 last year, Mr Chai, 61, became the fourth person in Klong Sai Pattana, a small community of about 70 families in Thailand's southern Surat Thani province, to be killed in the last five years. All four were community leaders.

Fellow farmers recall Mr Chai urging them constantly to grow their crops in spite of persistent intimidation to force them off the land. "He used to say 'work faster, because we don't know when we will die'," his son-in-law Supot Kalasong recalled.

According to human rights defenders group Protection International, more than 50 such activists have been killed in the past decade.

Between 2011 and 2013, more than 200 violent acts were perpetrated against them. Vocal community leaders and activists report getting anonymous phone calls threatening violence, or being watched by suspicious characters.

Some of the most volatile situations happen when local communities square off against big corporations they accuse of illegal waste dumping or setting up plantations on illegally acquired land.

In May 2014, more than 300 masked men with guns and knives attacked villagers who had blockaded a road leading to a gold mine in north-eastern Loei province which they allege was poisoning their water sources and making them sick.

The assailants tied up the villagers who, for the next seven hours, were assaulted and the women threatened with rape. At least seven villagers had to be hospitalised.

Just four days later, land rights activist Somsuk Kokrang was gunned down in western Krabi province where he had gone to probe the legality of a palm oil plantation.

The back-to-back attacks prompted the United Nations Office of the High Commissioner for Human Rights to urge the Thai authorities to "take urgent measures" to protect its human rights defenders.

"Communities affected by major land projects rely on such courageous individuals to air their concerns and defend their rights," said its spokesman Rupert Colville.

In most cases, a combination of corruption, red tape and shady ties involving corporations, local politicians, criminal networks and sometimes even local officials ensures that neither the masterminds nor the attackers are caught.

One rare exception was a case in the central province of Chacheongsao in 2014, when a court convicted the mastermind and the attackers behind the 2013 murder of a villager who had been leading the fight against illegal waste dumping. One of the culprits was a senior industrial works official, while two others were military sergeants.

Deputy national police spokesman Kissana Phathanacharoen said the police were doing their best to deal with such crimes, and have even created a database of contract killers. But he conceded that it was "cheap" to hire a killer in Thailand - in one case it cost a mere 60,000 baht (S$2,400).

"You are catching a shadow," he told The Straits Times.

The gunman who killed Mr Chai has yet to be arrested.

The murders have stoked fear not just within the victims' communities but also among other community leaders trying to speak out on issues that may affect corporate or government interests.

Activists, for their own safety, travel in groups or spread false rumours about their movements to shake off would-be attackers.

In Klong Sai Pattana, the murders of their community leaders have triggered anxiety and defiance. One weekend last September, residents put up a memorial to Mr Chai and the other three leaders in a rousing ceremony filled with poetry and song. Later, a handful of them trudged towards four guard posts erected at the edge of the land, ready to begin their shifts as volunteer lookouts and raise the alert at any sign of intruders.

A version of this article appeared in the print edition of The Straits Times on January 04, 2016 http://www.straitstimes.com/asia/se-asia/activists-in-thailand-face-threat-of-violence-death