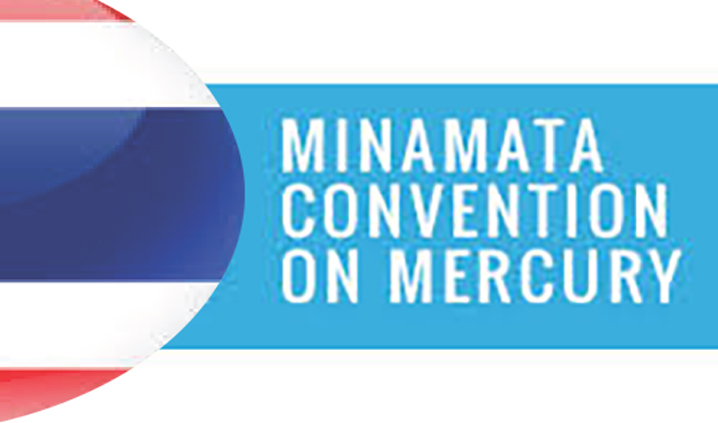 On 22 June 2017, the Governments of Thailand deposited its instrument of ratification, thereby becoming the 66th future Parties to the Minamata Convention.

The Minamata Convention on Mercury, a global treaty aimed at scaling down mercury use and production developed by the United Nations Environment Program (UNEP), recently surpassed the 50-country threshold required for it to become legally binding for all of its parties.

The Convention will now become legally binding on August 16, 2017.

Summary of the Convention

The Convention includes the following obligations by its parties:

* Phasing out and phasing down mercury use in a number of products and processes;

* Controlling measures on emissions to air and on releases to land and water; and

* Regulating the informal sector of artisanal and small-scale gold mining.

The Convention also addresses mercury’s import and export; safe interim storage of mercury and its disposal once it becomes waste; sites contaminated by mercury; and health issues, including pinpointing populations at risk, boosting medical care, and better training of health-care professionals in identifying and treating mercury-related effects.

The Convention is made of 35 Articles and 5 Annexes. The Articles can be divided into four main categories:

* Operational articles -- describe the obligations for Parties to reduce anthropogenic emissions and releases of mercury and mercury compounds to the environment, with controls on all lifecycle stages of mercury, including: supply sources and trade; phasing out and phasing down; artisanal and small-scale gold mining; air emissions and releases to land and water; and storage, waste, and contaminated sites;

* Support to Parties -- with articles relating to: the establishment of a financial mechanism, including the Global Environment Facility Trust Fund; the provision of capacity building, technical assistance, and technology transfer; and the establishment of an Implementation and Compliance Committee;

* Administrative matters -- with articles establishing the Conference of the Parties; the Secretariat; and procedures such as the settlement of disputes, amendments to the Convention, the adoption and amendment of annexes, the right to vote, signature, ratification, entry into force, reservations, withdrawal, depositary, and authentic texts.

Regarding the last of these, the U.S., in ratifying the Convention, included a declaration that any amendment to an annex to the Convention shall enter into force only upon its ratification by the U.S.

The first meeting of the Conference of the Parties to the Convention has been scheduled for September 24-29, 2017, at the International Conference Centre in Geneva, Switzerland. The Conference will culminate in a High-Level Segment on September 28-29, 2017, hosted by the President of Switzerland, entitled “Making mercury history,” and will be preceded on September 23-24, 2017, by preparatory meetings, including regional and Bureau meetings. Registration is available online and is requested by June 23, 2017. Implementation support resources are also available on the Convention’s website.